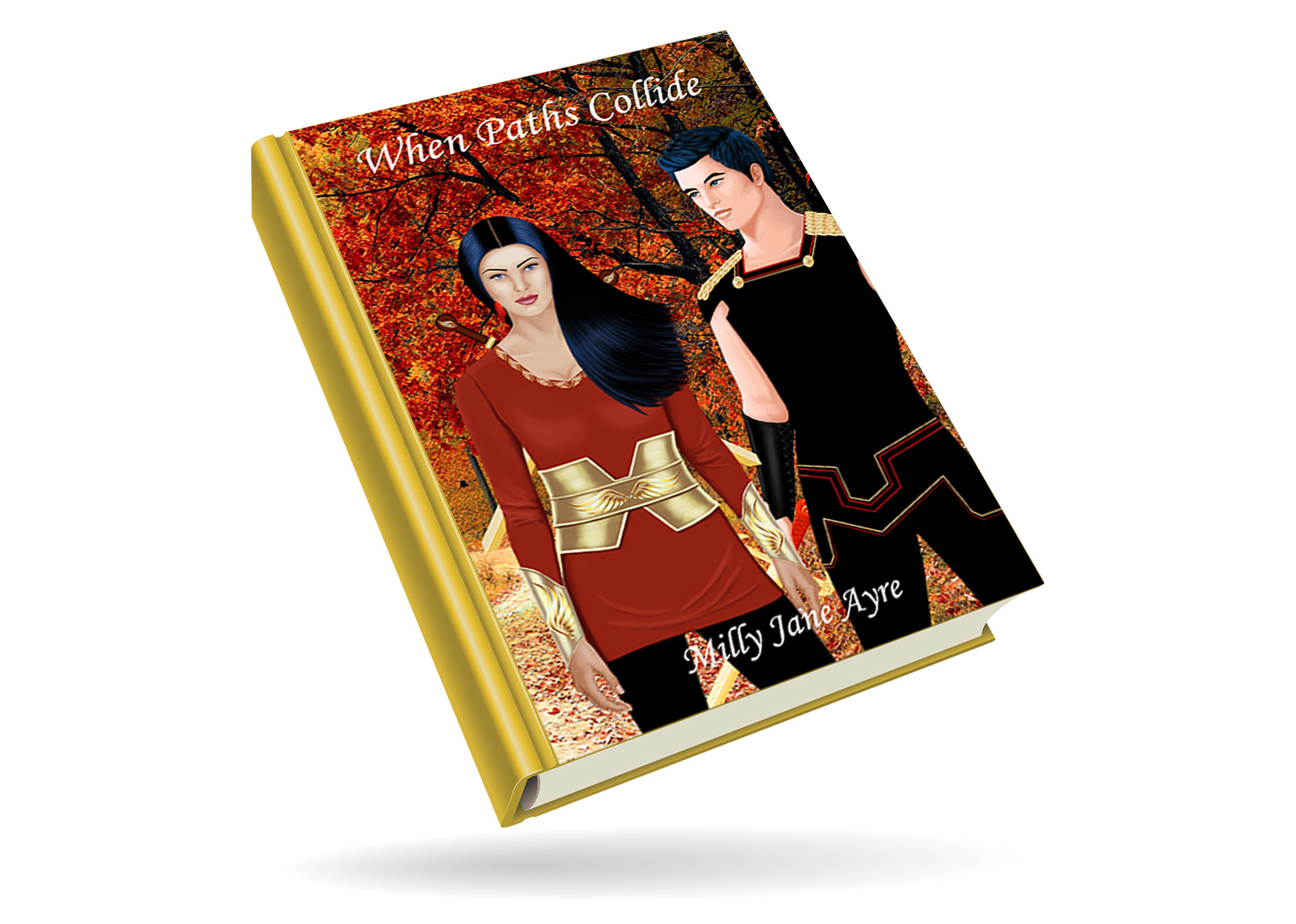 “I’m not going back and that’s final,” Shamone objected.

Frustrated, Sabian took hold of Shamone’s arm. Leading her back inside the Castle of Greytor, he insisted, “Well I have orders to the contrary Your Highness.”

Shamone tried to pull free of Sabian’s grip arguing, “I’d rather be outside.”

“And Herla would rather you be in the library paying attention to your studies which is where you should be right now.”

“Who cares about the politics of governing a kingdom? Not me!” Shamone protested.

“You may not Your Highness but your father and mother do and seeing as they want you to understand all aspects of ruling a kingdom, so will you.”

“It doesn’t mean I have to pay attention,” Shamone chided.

Opening the library doors, Sabian ushered Shamone inside. “You are not being given a choice in the matter. Now sit down and stop acting like a spoilt brat.”

Shamone stumbled forward a few steps. Folding her arms, she glared at him defiantly. Narrowing her eyes, she mused he was only three years her senior and that in a fight she might just be able to best him. He was arrogant, cunning and wily. He may be her father’s junior aide, but he was a capable fighter, much to Shamone’s chagrin.

While Shamone and Sabian continued to glare at each other, Herla, Shamone’s tutor entered the library. “If Her Highness thinks that I will tolerate this kind of behaviour then she is wrong.”

In her defence, Shamone argued, “When will you all realise that I am not interested in stupid politics, it’s boring, tedious and a waste of my time. And I only went for a walk in the gardens, it’s not a crime.”

“Sit down Your Highness and pay attention,” Herla snapped as she pointed a finger toward a chair.

Stomping toward the table Shamone dropped into her chair. Narrowing her eyes at Sabian, she threatened, “You may think that you have gotten away with this but you have not.”

“Now is that threat number six or seven Your Highness only I’ve lost count since this morning?” Sabian quipped.

Lifting a small book off the table Shamone hurled it at Sabian. Sabian ducked as the book whizzed past his ear clattering in the corridor outside.

Seconds later, Shamone saw a hand reach down to retrieve the book. Stepping into view, her mother, Princess Opia remarked, “I thought books were for reading not throwing.”

“Your daughter thinks otherwise Your Highness,” Herla said as she glared at Shamone.

“Then you had better convince her otherwise or she will not be leaving the castle for the next two weeks,” Opia cautioned in Shamone’s direction.

Giving Sabian and Herla daggers, Shamone defended, “I only went for a walk in the gardens nothing more.”

Placing the book on the table, Opia scolded, “Shamone, do not lie, you know full well given half the chance you would head off into the city or out visiting Mageena.”

“I haven’t been out of the castle for weeks, prisoners get more freedom than I do,” Shamone grumbled.

“That my dear, is because you offended one of your father’s friends. Was it not you who insulted his wife?”

“Only because she was encouraging her husband to kill animals for sport, for food yes, but not for the mere pleasure of it,” Shamone countered in her own defence.

“When Herla tells me you have studied I may concede to allow you a trip into the city, with guards and not alone,” Princess Opia rebuffed.

“With all due respect Your Highness, we could all be in for a long wait if that is the case,” Sabian rebuffed for he always had to get a dig in where possible.

Shamone mused she would like to get a dig of her own in, right in his ribcage with a sharp dagger.

Opia narrowed her steel cold eyes. “Well, until that day arrives, you my dear daughter are confined to the castle. You can go out in the grounds but only if escorted by either Sabian or guards, is that clear?”

“You can lock me up for an eternity, it will not make me like politics any more than I already do, which is not at all,” Shamone objected with a huff.

Opia gave Shamone one of her more exasperated looks, the look that told everyone not to cross her, even Shamone. Still, Shamone mused, Sabian could not watch her every second of the day and when the opportunity arose, she would slip out and visit Mageena and Ilengor regardless of what people said.

Mageena was once the guardian and tutor to Shamone, a kindly lady whom Shamone cared very much for. Sabian however did not, and over time, he had conspired to have Mageena replaced with Herla and her husband Ilion. Ilion was not so bad, but Herla was mean to the bone and from day one, neither Herla nor Shamone had found any common ground. Instead, they tolerated each other because Opia insisted on it.

Ilengor, Mageena’s husband at one time had been Prince Tylox’s head officer, but he had since retired. Shamone had been advised to cut ties with Mageena and Ilengor, but Shamone would never break the bond she had built between them, for Ilengor, unbeknown to her parents, had taught her, Shenshu, the art of two swords.

It was forbidden for Shamone to fight with weapons of any kind, but that did not stop her from badgering Ilengor into teaching her Shenshu, the art of two swords.

Even Ilengor had to agree it would be beneficial for Shamone to learn how to protect herself and so conceded to teach her. Ilengor often regretted his decision when Shamone got herself into scrapes with other people.

Shamone was a loyal and compassionate princess who fought to protect those less fortunate. This personality trait started and ended with Shamone. Her father, Prince Tylox, was a ruthless leader of their kingdom, the Kingdom of Hyperion. Her mother was the same, always greedy for more power and riches, and with no one to oppose them, they always got what they wanted.

Earlier that morning, Shamone had heard from Fran, the head cook, that Mageena had not been feeling too well. Shamone, without thinking, had escaped the castle to pay her a visit. With her plans now on hold, Shamone vowed to try again once it was dark because nothing could keep her from her friends.

The day had dragged for Shamone as Herla and Ilion drilled into her the finer points of politics and state commerce. And, by the time Shamone had left the library it was late evening. Instead of dining with her family, she ate in her private quarters upstairs, where, if she was lucky, very lucky, she could find peace and quiet.

There was a maid waiting outside Shamone’s private quarters. Bowing, she asked, “Can I get you anything before you retire Your Highness?”

“Yes,” Shamone replied. “You can get me something to eat but when you return, leave the food on my table. I’m tired and I will rest for a while. Oh, and if anyone asks just tell them I’ve retired early.”

Bowing, the maid headed down the corridor to do as Shamone had requested.

It always amused Shamone how easy it was to hoodwink the younger maids. Smiling, she hurried back into her room. Taking a few pillows, Shamone stuffed them down her bed to make the maid think she was sleeping. Changing into clothes more suited to traipsing down dirt tracks, she peered into the corridor outside. When the coast was clear, Shamone ran down to the south-west tower.

Opening the tower door, Shamone entered the large stairwell. Shamone’s quarters were on the second floor of the castle but the stairs spiralled up to a third floor where the servants lived and down to the ground floor. Shamone could access her secret passage from behind a tapestry at the bottom of the stairwell or from behind another tapestry on the second level. Pressing a stone, Shamone slipped behind the tapestry and into the secret passage. Sealing it, she crept down the staircase until she reached the ground floor. Activating another lever, she exited the tower behind a large prickly shrub. After closing the entrance, Shamone hurried across the gardens to the castles tall perimeter walls. Again, from behind a tall shrub, Shamone gained access through the wall and out into the forest on the other side.

Now free, Shamone headed left around the perimeter walls. Reaching the roadside, she peered out of the forest. To her left the road headed down past the castle gates. Straight ahead it led to Ilengor and Mageena’s cottage. Racing ahead, Shamone smiled, it always amused her when she outsmarted Sabian. Still, she would have to be quick, if he noticed she was missing from the castle he would come looking for her. If he found her, he would use it against her, he always did. 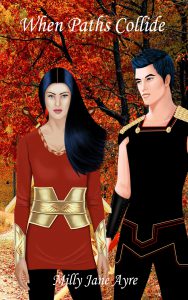