It was simple, Princess Shamone would visit Count and Countess Corvus in Vicarra, spend a few days with her parents whilst being entertained by their hosts and then return to Greytor Castle in the Kingdom of Hyperion. Wrong.

True to form, Princess Shamone made a simple decision to take a shopping trip into Vicarra but she unwittingly becomes embroiled in a plot to keep the Crystal of the Seven Mists in the hands of its true guardian.

It should have been an easy task but Lord Lamont and his friend Korbin had other ideas. They would steal the crystal at any cost and as tragedy strikes, Shamone vows to help align the crystal to its true guardian before anyone can steal or corrupt its power. 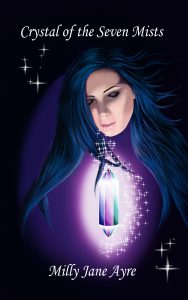