Princess Shamone was the only daughter to Prince Tylox and Princess Opia. She lived in a fancy castle and could have anything she desired. What she desired however was to explore her kingdom without an entourage of chaperons and guards. Uncaring of the restrictions forced upon her, Shamone enlists Ilengor, an ex-soldier of her fathers, to teach her the art of Shenshu, the art of two swords.

Ilengor’s wife Mageena, used to be Shamone’s tutor and guardian at the castle. However, Sabian, her father’s young personal aide, had conspired to have Mageena replaced by new tutors. When he succeeded, Shamone swore to make Sabian pay for this traitorous act, but Sabian was as clever as Shamone. Much to Shamone’s chagrin, he swore to catch her should she leave the castle without permission.

Undeterred, Shamone simply donned a disguise and armed with her twin blades she went in search of an adventure beyond her castle walls. And when she overhears a conversation about a large stolen emerald, she decides to steal it back and return it to its rightful owner.  The only thing stopping her from completing her quest is her ever-watchful arch nemesis, Sabian. 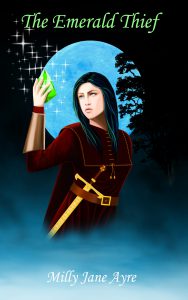