Valcat, a Calliston Warrior in Oberon, had warned Kameko, a former Red Griffin Warrior in the Kingdom of Tethys, not to go to the Fire Mines. As usual, his warning went unheeded because tracking criminals was what she did for a living.

Whether Valcat liked it or not, Kameko would ignore his sage advice and head out to the Fire Mines alone. But unbeknown to her, her client had ulterior motives for enticing her to the mines. Finding herself in more trouble than she bargained on, Kameko realises that maybe, just maybe, Valcat’s warning had been right all along.

Once in the fiery depths of the mines, Kameko uncovers a secret hidden deep within its warren of caves. A secret that would give her the answer to a long burning question, the question of where she really came from.

Shocked by the revelations, Kameko goes in search of the truth, and hot on her trail is one very annoyed Calliston Warrior.

Finding the Oracle of Truth (The Mixed Kingdoms Series Book 4) 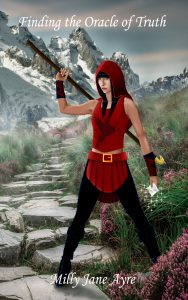