Priest Haruko ruled the Red Griffin Temple in the Kingdom of Tethys. His warriors guarded the temple and surrounding area and although Tethys itself had its own army, his warriors were highly skilled in the art of fighting. The temple had six orders of warrior. To gain admittance through the ranks you had to prove your worth by fighting and beating a warrior’s rank above your own.

Every warrior had to earn their rank through blood sweat and tears and although the temple housed mainly male warriors, there were a few females who had clawed their way up through the ranks.

Kameko’s goal was to be the first female warrior to reach the sixth order. Unbeknown to her, she had a secret enemy hell bent on having her thrown out of the temple. So now, not only did she have to fight for her rank, but before long, she would be fighting for her very life. 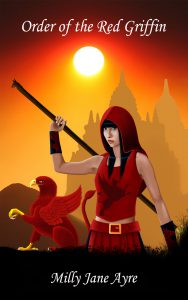