When Auzara found Francine, the sister to one of her friends lying unconscious and barely clinging to life, she had a good idea who had committed the crime. He’d goaded and taunted that he would seek Francine out. In doing so, his actions set off a chain of events that would test Auzara and Bethany to the limit. And when darkness threatened to extinguish the light of a peaceful soul, Auzara vowed to bring it back into the light, but to do so she had to stop her friend from turning into that which she sought to destroy.

Bethany vowed that her sister’s attacker would pay for what he had done. Stripping off her temple robes, she changed back into her old warrior clothes. With a steely resolve, she fastened the scabbards that held her twin Palaso blades across her shoulders, and collecting her horse, she rode out of the Temple of Wolf. With revenge in mind, she went in search of her quarry.

Unfortunately for Bethany, her sister’s attacker was not the only monster she would face. In the Kingdom of Oberon, a darker force awaited her. Its insidious smile curled the edges of its cruel lips, her hatred and rage would be his for the taking. 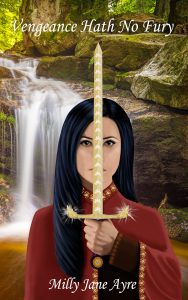