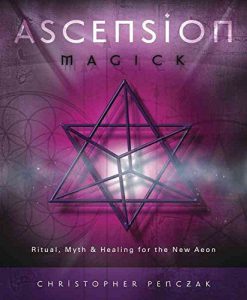 Just thought this book was worth a mention, as if I haven’t got enough books bowing the shelves of my bookshelf already, I thought I’d push the boundaries of chipboard just a little bit further with this book. It’s a big book, but that’s not a bad thing, it’s packed with all sorts of information which makes for an interesting read. Little did I know that I would need to test out one of the spells.

The spell I used was for Banishment of Unwanted Forces. I’d only had the book a few days and had already made a few notes on some of the ingredients I would need. – if I go walking around ancient sites I often collect; with nature’s permission of course, leaves, bark, berries or petals.

It was my dad’s birthday, so we went for a walk through Rufford Park with our trusty Nikon cameras in hand. At one point we ended up in the ruins of the priory. After going inside we sat at a table with the life-size model of a monk. We took some pictures with him and listened to the sound of monks chanting, it which was very relaxing. On leaving the building to head down to the lake, I remember thinking how far back the park dates and that it must have a lot of spirits wandering around there. I then thought, I hope one doesn’t follow me home, because being a Reiki healer I tend to attract spirits. We had a nice day then paid an exorbitant amount of money for an ice-cream at the tea room. I’ve not see that kind of robbery since Dick Turpin threw a cape around himself and yelled, stand and deliver, only, instead of stand and deliver they shouted, strawberry or vanilla. When she told me the price, I felt like shouting, get me a chair, I think I’m going to faint, and it wasn’t from the heat of the day. Still complaining about the ice-cream, we head home. My dad leaves and I go upstairs to work on a new story I’m writing. That’s when I noticed a strange smell and electrical things started going haywire in my house. I said nothing, but when I went downstairs, my mum noticed the odour. She screwed up her face and said, what is that smell? I shake my head and think, here we go, I’ve brought someone home from my walk.

Now normally I would smudge and draw a few symbols, but I thought this time I would try out the book. So, I flick through the pages until I find Banishment of Unwanted Forces. On my walk, I noticed a hawthorn in the forest and collected a few of its white petals so they were already in my pocket. Luckily I already had everything else I would need. Pure water, 7 drops of Lavender, Orange rind, Sea Salt, and white flower petals. I can’t tell you how nice this cleansing water smells after you have made it. I made a batch for a friend and she is now smitten by it. So, following the instructions in chapter 14 page 324 I set off around my house. I started at the top and intoned the 7th Ray decrees, examples of which start in chapter 13 pages 286-290. I finished the cleansing and the smell and the spirit vanished.

Odd how I had bought the book only a few days before and then found that I needed it. Well, let me tell you it worked, so I was as happy as a squirrel finding it’s hoard of nuts. So, I for one can highly recommend this book and I will be experimenting with it again. I’m going to explore the Magick of the Rays chapter 13 and make some Ray sprays which you can also use when you do your spell work.

There is information on Archangels, Ascended Masters, The Starry Ones, Candle Magick, Psychic Protection, Implant Removal, Ascension Cosmology, Spiritual Hierarchy, in fact all sorts of information. There are drawings of the Angelic Forces, namely Angels Signatures.  Reiki symbols, Chakra Charts, Runic Star Alphabet, Egyptian Hieroglyphics, Enochian Signs, it just goes on and on, so this is a great reference book to have on your shelf.

I also wrote a review on Christopher Penczak Reiki Magick book which I also loved and used to sell in my gift shop. I highly recommend that book as well.

So, I just wanted to share my little story about the book and hope that if anyone out there is toying with the idea of purchasing it, then go ahead and get it, you won’t be disappointed. Oh and try to make the Banishing Cleansing water it smells divine.

Taking a magickal approach to this often misunderstood spirituality, Christopher Penczak explores the fascinating path of ascension. Ascension Magick unveils the diverse mystical roots of ascension, and highlights where the beliefs and practices of today’s “light workers” intersect with those of modern pagans, witches, and magick practitioners. It also examines the practical side-various forms of magick, energy healing, meditation, past life regression, channeling, dowsing-and provides helpful meditations, spells, and exercises. From angels and aliens to reincarnation and the Merkaba, Penczak leaves no stone unturned in this remarkably thorough and absorbing examination of ascension spirituality and magick.

Christopher Penczak is an award-winning author, teacher, and healing practitioner. He has studied extensively with witches, mystics, shamans, and healers in a variety of traditions from around the world to synthesise his own practice of magick and healing. Formerly based in the music industry, Christopher was empowered by his spiritual experiences to live a magickal life, and began a full-time practice of teaching, writing, and seeing clients.

Ascension Magick: Ritual, Myth and Healing for the New Aeon

My next book review will be on the The 72 Sigils of Power, Magic, Insight, Wisdom and Change. I plan to work with the book for a time and then I will give my opinion on it. It will be very interesting putting it to the test, so when I’ve given it sufficient time I will post the results on my blog.